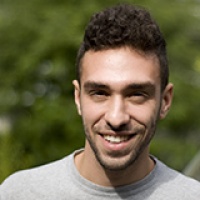 Miles Aron joined The Interface Group in September 2013 with a Fulbright Scholarship to research reversible, focused ultrasound induced opening of the blood-brain barrier.

He had previously graduated from the University of Hartford in May 2013 with a BSE in Acoustical Engineering. Before his graduation he had completed an internship at NASA where he designed and tested a standing wave calibration system for acoustic testing in a wind tunnel. Previously, he worked at the Stanford Linear Accelerator for the US Department of Energy where he developed an image analysis program for evaluating dark matter detector crystals. At the University of Hartford, he worked with the mathematics department investigating the stability and bifurcations of a non-linear Klein Gordon Equation.

After the completion of his Fulbright year, Miles joined the biomedical ultrasonics, biotherapy and biopharmaceuticals (BUBBL) laboratory and the Hertford College at Oxford in 2014 as a DPhil student under the supervision of Professor Eleanor Stride. Miles is continuing research on the cellular mechanisms behind ultrasound-based therapies with a focus on translation to targeted and non-invasive drug delivery to the brain.