Are you up to the challenge?

by: Stefano Buosoin: About us, Educationon November 28, 2016

Recently I came across some blogs where people were asking for suggestions on what to do at the end of their PhD studies. Besides the evergreen question about moving to industry or not, another dilemma was whether to stay in one’s current research field for a post-doctoral appointment (you can find an interesting article here). I thought I would share my experience as a (freshly) graduated PhD student in this blog.

Looking at what happened to the circle of my PhD friends, once you finish you are often required to move to another city or country, resetting everything you have built – socially and maybe academically – in the last three to four years. This is already a scary step, and it generally happens whether you decide to stay in academia or not, but if on top of that you think of moving to a new field where you do not possess the same amount of skills, it is probably quite enough to keep you awake at night. Friends and family will be asking “Are you sure? Why do you want to do that?”, and that has happened quite often since I joined the Interface Group in July.
To be fair, I got asked a similar question during my interview for the PhD position at Imperial College which I eventually started a couple of months later. I had just obtained, in fact, a Master degree in gas turbines, and the topic of this particular position was on membrane wings inspired by those of bats. At that time, the idea of working at a top-ranked university which also happened to be in London was enough to persuade me. And three years seemed to me a very long-term plan.

But I must confess, that this time around accepting a post-doc position in yet another country and yet another field was not as easy, particularly because I thought it was time to seriously make a long term plan (welcome to the real world, you’re not a student anymore!). London, in fact, was my comfort zone, and after four years British habits had started to sink in. On the one hand, continuing as a post-doc at Imperial would have meant working on the same subject of my PhD, using the models I had already developed and tested and interacting with research staff I had gotten to know pretty well. Considering the first rule of the Academic Club – “Publish or Perish” – that would have surely meant a higher number of publications, since the background of topics and methods had already been consolidated. On the other hand, it implied a very static path, with the risk of fossilizing and remaining constantly under the wing of the same supervisor. Moving to Zurich meant literally changing everything I have just described, a jump into the unknown on both the social and academic side of life.

I guess I have chosen to move because I liked the challenge.

I personally find the chance of starting my own work from scratch really exciting; step by step learning and mastering a new subject, and finally contributing to the field with something new that came from my own ideas. It is really positive, in my opinion, to be able to look at things with a new perspective. And this is quite easy when you come from a different background. On the bright side, you already know how to do research and how to use a scientific approach to find your answers. Day after day, I am learning to get used to the new jargon and to the interaction with doctors and clinicians that I had never expected to collaborate with during my previous studies. The contamination (the biologists at my institute will hopefully allow the term) and development that comes from fields that are very apart can be unpredictable. As an example, you can read here about the impact that some pieces of technology developed by NASA have on a daily basis on our society, spanning from medicine to transportation to public safety. It can either work really well, giving you the chance to do something significant in the field, or it can miserably fail. That’s part of the equation and you have to take your chance.

In short, I think it is of high value to combine perspectives and tools of different disciplines to answer research questions that are new to you. I have personally grasped with both hands the chance of challenging myself with a new research field and I hope that it will bring fruitful results in the future. 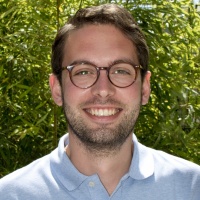 is a post doctoral researcher in the Interface Group at the Institute of Physiology of the University of Zurich. His current research focuses on computational haemodynamics in coronary arteries.