As part of a project-based course, we are initiating students to micro-fluidic devices for medical diagnostics. The underlying principle is to automatize a diagnostic procedure typically done in a specialized laboratory and bring it to the point-of-care. Beyond automation, miniaturization offers a number of advantages including low fluid volumes (implying smaller patient sample, less waste and lower reagent costs), faster analysis and potential for highly compact systems, all of which make these so called “lab-on-a-chip” approaches ideal candidates for the development of point-of-care diagnostic devices. In fact, some micro-fluidic devices already are on the market (as illustrated by the Swiss Spin-off Abionic for example), which brings some excitement to this problem.

As for any product development, students first have to analyze “where is the pain”, what are the requirements, and how can they most efficiently answer both of these. At this stage, one can dream, take inspiration from cutting-edge research publications and make the best and fanciest device possible … on paper!

Then comes the inevitable reality check. The project has to be performed within a given time frame, resources and budget. And … even more importantly … their part has to be implemented, manufactured and actually work!! Everything is in the details, the integration of different constraints, the interaction between teams, and this really is where things become interesting.

A lot could be said about the communication aspect or initiation to product development, but what I want to introduce today is micro-fluidics. On micro-fluidics chips, everything (or almost) is in fluid form. Students introduce a liquid sample (meant to represent blood or urine) and perform their analysis. One of the questions that quickly arises is how to control processes on these chips. How can one move fluid from one compartment to the next, control exact volumes, or ensure that steps happen in a given order, at the micro-scale?

The underlying principle of control is to use two opposing forces (one that accelerates the process and one that slows it down) and modulate them to achieve a set objective. In a car, the modulation of fuel injection (which ultimately accelerates the vehicle) against friction (which decelerates it) is the basic principle of cruise control. On a micro-fluidic device, forces that can be used include pressure centrifugal, Coriolis and Euler forces in rotating CD-like platforms, and, last but not least, capillary action.

Capillary action drives fluids through narrow spaces. It is a major driving force in nature and can effectively drive fluids over large distances. Capillary action allows for the movement of water from wet to dry soils. It is also central to life in the entire plant kingdom where the combined action of capillarity in xylems and evaporation drives water and nutrients from the roots up to the leaves, sometimes over tens of meters. More pragmatically, it is what makes water climb up one’s trousers if they are in contact with a wet pavement, even without jumping into a puddle.

In the world of micro-fluidics, because dimensions are small, capillary action is a central theme. If unaccounted for, it may play against you, requiring large forces to drive fluid through micro-channels made of hydrophobic material, or draining fluid when you would not have desired it. But it can also very nicely be used to one’s advantage.

A nice visual example of capillarity effects and nature-inspired micro-fluidics can be found in the work of He et al. 1. The authors developed a method to replicate the venation pattern of actual tree leaves in synthetic materials. The underlying idea was to take advantage of capillary networks readily optimized by nature for optimal nutrient and oxygen supply and use it towards cell culture and tissue engineering. Putting droplets of colored ink at the stem of their synthetic leaf, the authors show that they can maintain a continuous perfusion without external pump. In the same manner as in actual leaves, fluid flow is maintained through the mere action of capillarity and evaporation through the synthetic gel. The result is aesthetic and deserves a look.

Capillary effects (or a reduction thereof) can also be used to create valve mechanisms and thereby control timing and impose operation sequences 2. Hydrophobic valves typically entail inserting a hydrophobic section into an otherwise hydrophilic channel. The fluid moves forward until the hydrophobic section, where it is stopped until sufficient external force is applied to overcome the hydrophobic barrier. Capillary valves achieve a similar effect through a sudden expansion of the channel, which again stops the fluid progression until sufficient external force is applied. A variant, which I quite enjoy, are capillary trigger valves 3, where a first fluid is stopped by a capillary valve until the trigger (or second fluid) fills the large channel and relieves its surface tension. Syphon valves have been proposed for spinning Lab-on-a-Disk platforms and make use of a competition between capillary and centrifugal forces to control timing. Under fast rotational speed, the fluid is confined in the syphon. If the rotational speed decreases, capillary forces dominate again, allowing fluid to overcome the syphon valve and continue to the next step. For spinning disk platforms, combinations of capillary and syphon valves in series offers a simple way to control fluid flow 4. 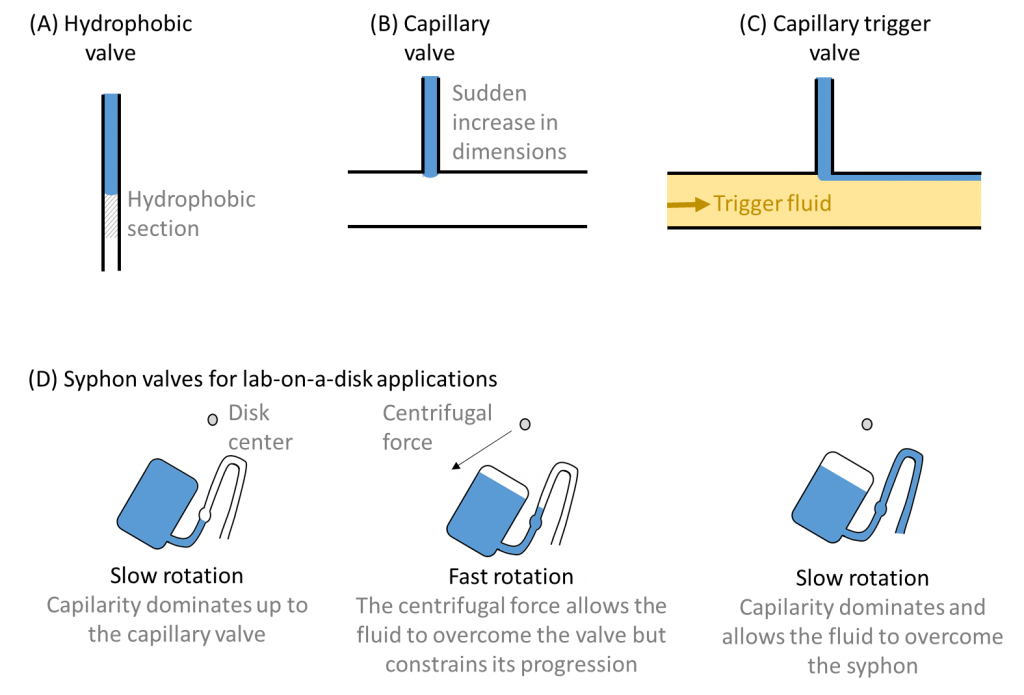 What I like in all of this is that in order to contain complexity, these control mechanisms are based on simple principles. Yet … although seemingly simple, these may be combined to perform complex tasks, following a path very similar to micro-electronics. So let’s just see where it all will take us!

Disclaimer: This blog entry is in no way meant to be exhaustive and only provides a few points that spiked my interest on the way, hoping that they may trigger yours as well. There are of course numerous other processes that have been developed, with thousands of publications on the topic of micro-fluidics. For the interested reader, reviews such as 2 can be a good place to start. 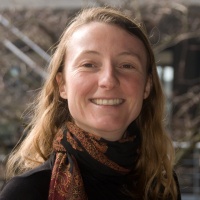