Lab management, time management and the joy of getting things done

Being a Lab Manager at the Interface Group or any other Research Lab is definitely an interesting and rewarding experience. It can also be infinitely frustrating when one realizes that the rate of task inflow has risen above the rate of task outflow. At this point it will be painfully obvious that the only way forward is to increase their productivity, and a good way to do that is through discipline and organization. I would like to write a few words on how I manage to get my head above water and keep it there, in the hopes that you, the reader, might be inspired to pick up a tip or two.

But first, what IS a “Lab Manager”? The word can mean many things for different organizations and the definitions can vary much indeed. It can mean “the person who makes sure that the lab is always stocked with consumables” and it can also mean “the person who is in charge of vast numbers of lab workers and is constantly on the lookout for ideas on improving lab operations”. At the Interface Group, the meaning of the term is fluid and adapts as the needs of the lab evolve. So, yes, I am this guy with two master degrees and one PhD who, on occasion, has actually spent brain power on deciding how many boxes of paper tissues need to be purchased for the lab. On other times, however, I will spend brain power on actively managing (and, if needed, micromanaging) the work of others in the group. Either way, I am always on the lookout for ideas on improving lab operations. And, either way, I always have too many things to do and too little time to do it.

So here are my tips on how to organize a large, varied and constantly shifting workload:

Remember, people like to be productive! We all enjoy the feeling that things are moving along and hate feeling swamped. By meticulously documenting what needs to be done in a way similar to the one described above, and by breaking tasks into simple to do chunks, everyday work can start feeling almost as effortless as playing a computer game: New quest -> “Complete this document and sent it to your colleague” -> Quest completed! -> New quest: “Wait for your colleague to finish proof-reading” -> Quest completed! -> New quest: “Submit the document” -> Quest completed! Rejoice! And feel the Joy of Getting Things Done!

Note: Some of these ideas on how to manage myself, my work and my time I have developed while reading “Getting Things Done” by David Allen which I would strongly recommend to anyone who would like to increase their productivity. Just buy it and read it. No, I’m not affiliated in any way with the author. A word of warning though: Treat this book (and any other self-help book for that matter) not like Holy Scripture but more like a good and trusted friend with whom you agree to disagree on some issues but who can always give you a word of advice when you most desperately need it. The same applies to this blog post; use your brain and decide what works best for you! 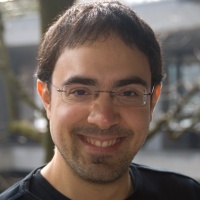 is the Lab Manager of The Interface Group. He makes certain that everything and everyone works at peak efficiency. He also finds time to do research on the side.