The spirit of self-efficacy: origins, roles and real life performances!

You might remember the famous children’s story The Little Engine that Could by Watty Piper.

This tale is about a little train engine who knew the effectiveness of believing in oneself in turning impossible dreams to reality. What do you do when facing a challenge? Do you feel you can rise up and achieve your goals, like the little train engine, or do you give up in defeat and quickly lose confidence and faith in your personal abilities?

Individuals who persist in the face of harsh conditions demonstrate elevated levels of an exceptionally successful indicator of inspiration: self-efficacy. Albert Bandura, an early cognitive psychologist, best described it as follows:

“The belief in one’s capabilities to organize and execute the courses of action required to manage prospective situations”.

In other words, self-efficacy is an essential part of person’s self-system which defines how he/she perceives situations and behaves in response to different conditions. According to Bandura, there are four major sources of self-efficacy that individuals need to get familiar with in order to transform that “I can’t” attitude to an “I can do” attitude.

Social modelling: Observing other people who successfully accomplish their tasks is another imperative source of self-viability that promotes our belief in being successful in accomplishing similar tasks. As Bandura said, “Seeing people similar to oneself succeed by sustained effort raises observers’ beliefs that they too possess the capabilities to master comparable activities to succeed.”

Social persuasion: The positive encouragements and verbal supports from outside observers will help individuals overcome their self-doubts and concentrate on giving their best push to succeed at the particular task.

Psychological responses: According to Bandura, “It is not the sheer force of enthusiastic and physical responses that is essential, but instead how they are seen and translated”. The emotional reactions and passionate responses in various circumstances are imperative sources of self-efficacy which influence how a person feels about his/her own capacities. People who turn out to be greatly apprehensive in doing challenging assignments suffer from feeble sense of self-efficacy. To handle the situation, they need to enhance the feeling of self-viability by figuring out how to bring down stress level in confronting a troublesome situation.

A robust sense of self-efficacy affects your daily life in various ways and helps you to sustain the perseverant endeavours to achieve success. It nurtures your innovative thoughts to deal with challenging problems by considering them as tasks to be mastered and not to be avoided. It deeply increases your interests in participating in various activities and enhances your confidence to be promptly recovered from setbacks and hopelessness in different stages of life. It rises your work engagements and supports you in carrying out the specified tasks. It boosts the confidence to step into new horizons and maintain composure in hard times instead of panicking and feeling helpless. Self-efficacy is a state of mind that can increase your prosperity and enable you to do what previously seemed impossible. Have a go, boost your self-efficacy, become strong and think out of the box! 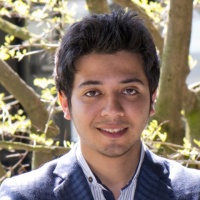 is a PhD student in the Interface group. His background is mechanical engineering, and his main research interest lies in the identification of solute transport process across the cellular plasma membrane using systems biology approaches.